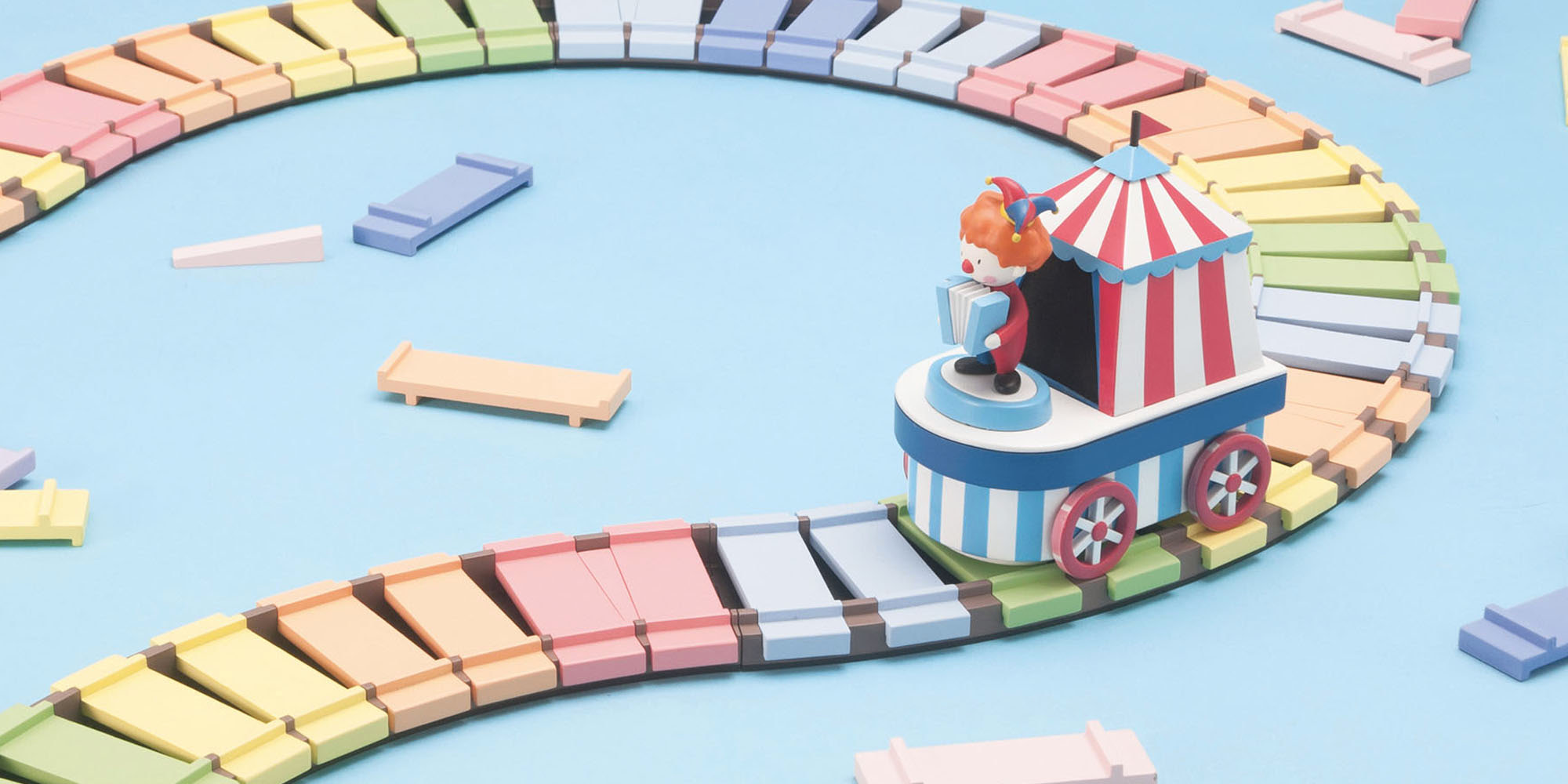 Through the metaphor between railway toy and music theory, Melody Railroader makes the abstract music theory intuitive and understandable.

Design for 3-7 years-old children, as toy at home or as teaching material in classroom. These kids at the preoperational stage can think in terms of symbols, but they aren’t yet able to effectively take other people’s perspectives.

The aim of this project is to discover the possible ways to make music theory more understandable and to help children to learn music in a more playful and stress-free way.

A set of railroad toys that makes the music theory visible and comprehensible. Through playing with it, children can grasp the idea of music theory by osmosis and apply what they learned in future music education.

We visited kindergarten to observe the music class on-site, and had an interview with music(instrument) teachers to get a better understanding of their teaching methods, teaching materials, and the different scenarios they have in the classroom. We gained these insights: 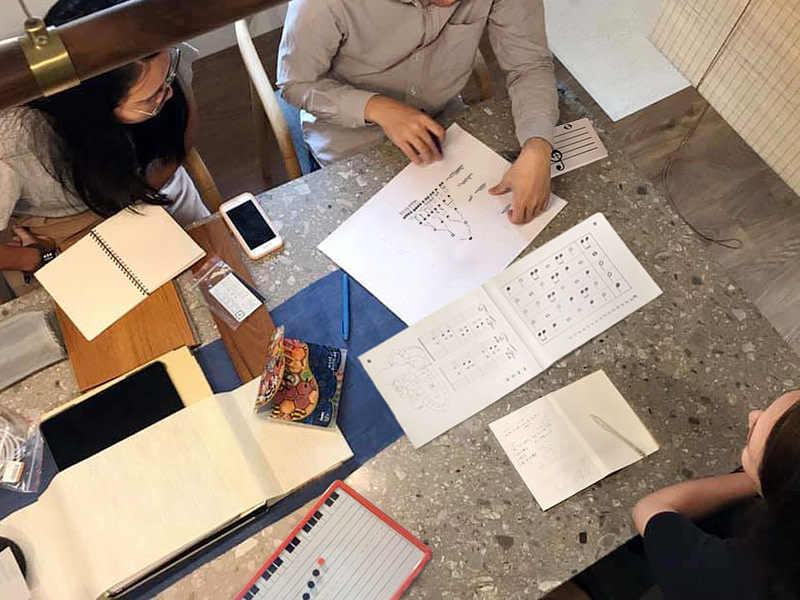 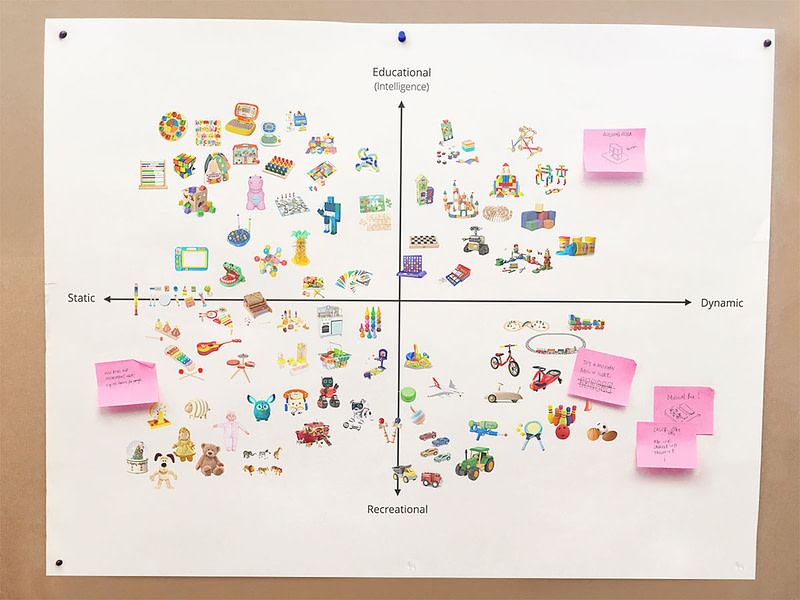 As playing is the best way to learn, we did general research on the playthings by collecting various kinds of toys for preschoolers, including but not limited to constructional, instructional, symbolic and sensorimotor toys. By sorting them in different ways, we tried to find the logic and got inspired by how toys teach kids new things in playful manners.

We found some interesting similarities between music and railway toys. The mobility of toy train makes it a great metaphor for music playing -if the train is a musician, the rail would then be the sheet music that he plays through. The width of the train track refers to different duration, that kids can see the abstract concept of musical note. 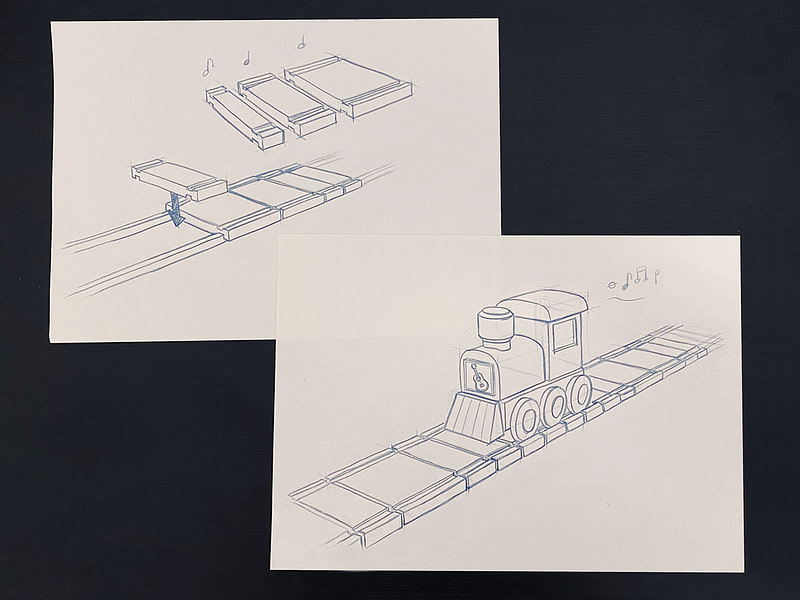 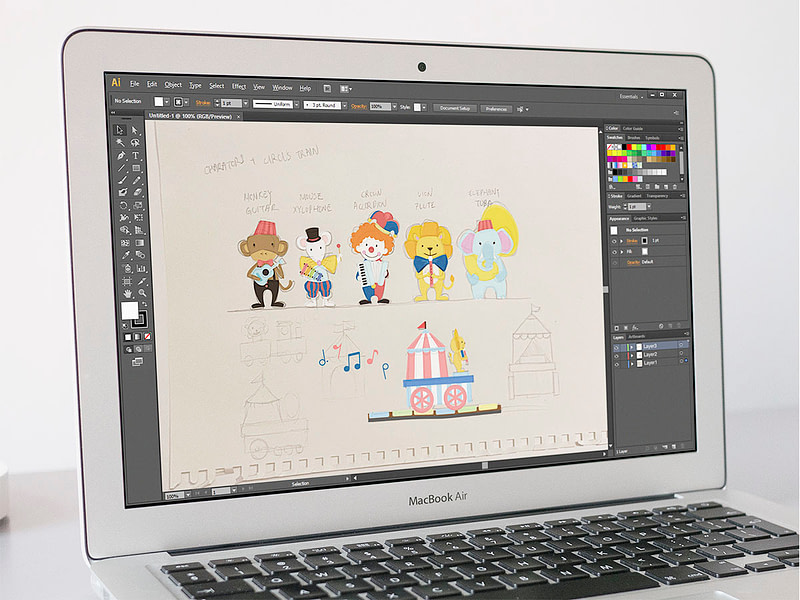 Not just a train

As the sketch above, the original plan is to use the conventional image of a train toy. But we quickly found out the link between a normal train and music was not strong enough. Through brainstorming, we decided to add the theme of a circus that is traveling the world by a train.

Each circus animal plays an instrument. Changing the animal standing on the train would change the timbre played. And the circus tent behind the animal would work as an amplifier for a better music quality. 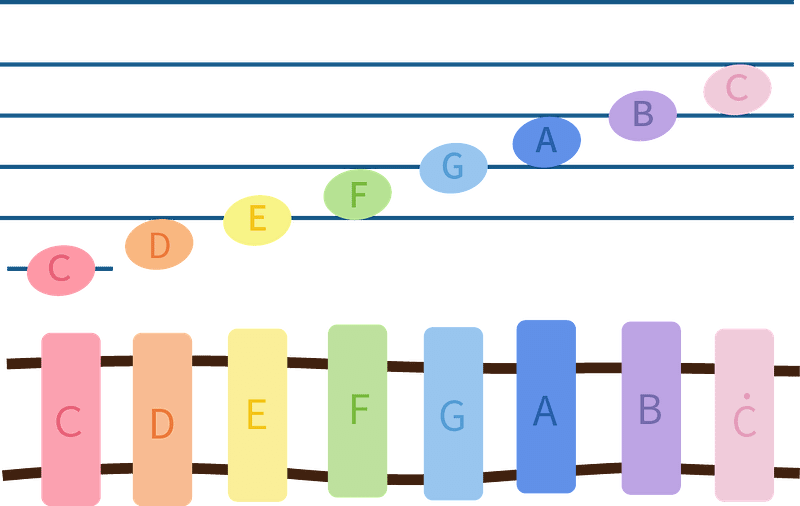 The train senses the colors on the rail, and play the corresponding music.

Each color of the train track is referred to a note on the music scale. Running the circus train through the rail, the RGB color sensor on the bottom of the train would detect the color on the rail track, and play the music based on the arrangement of the tracks. 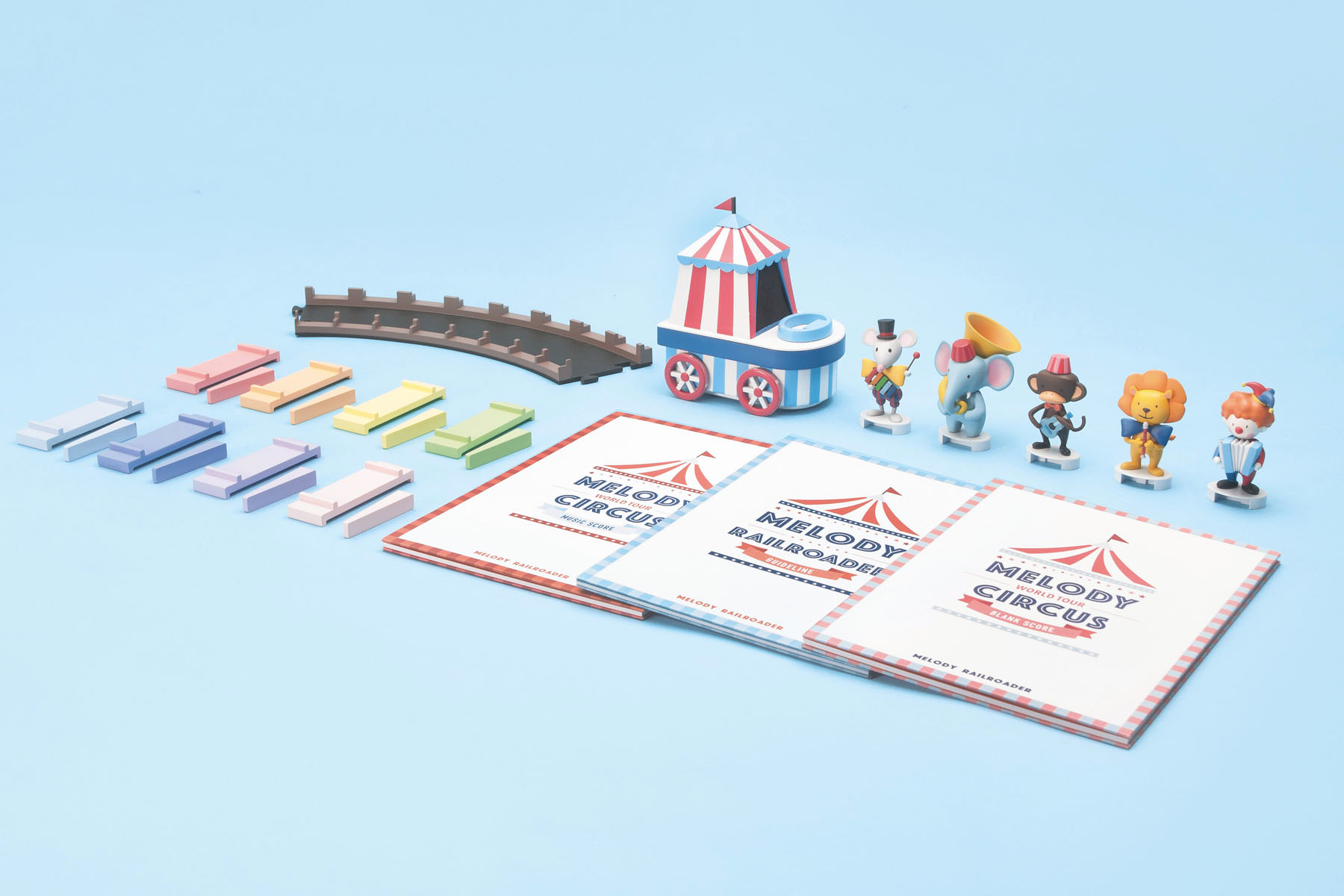 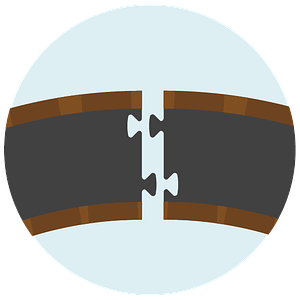 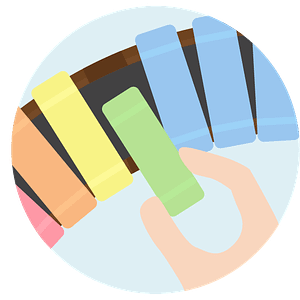 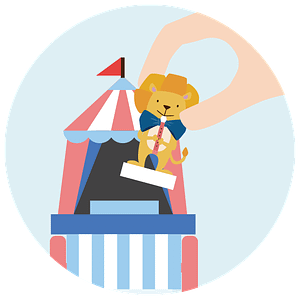 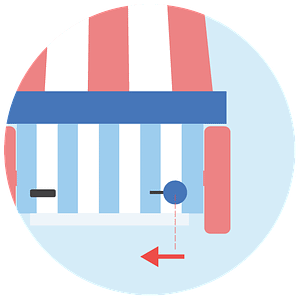 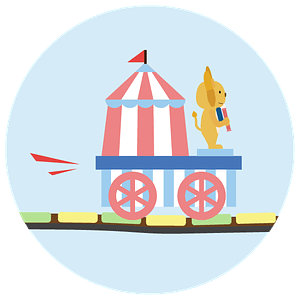 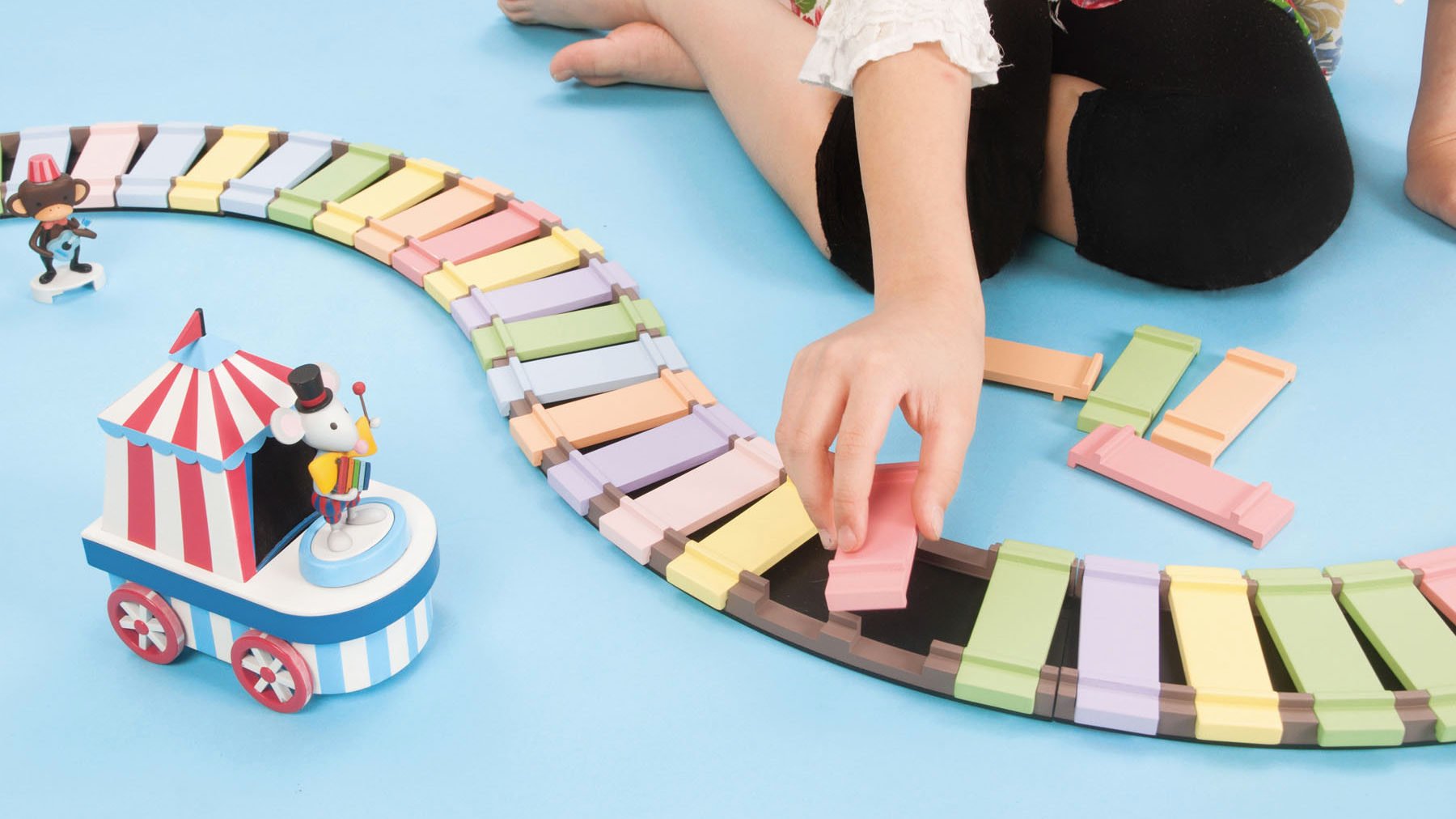 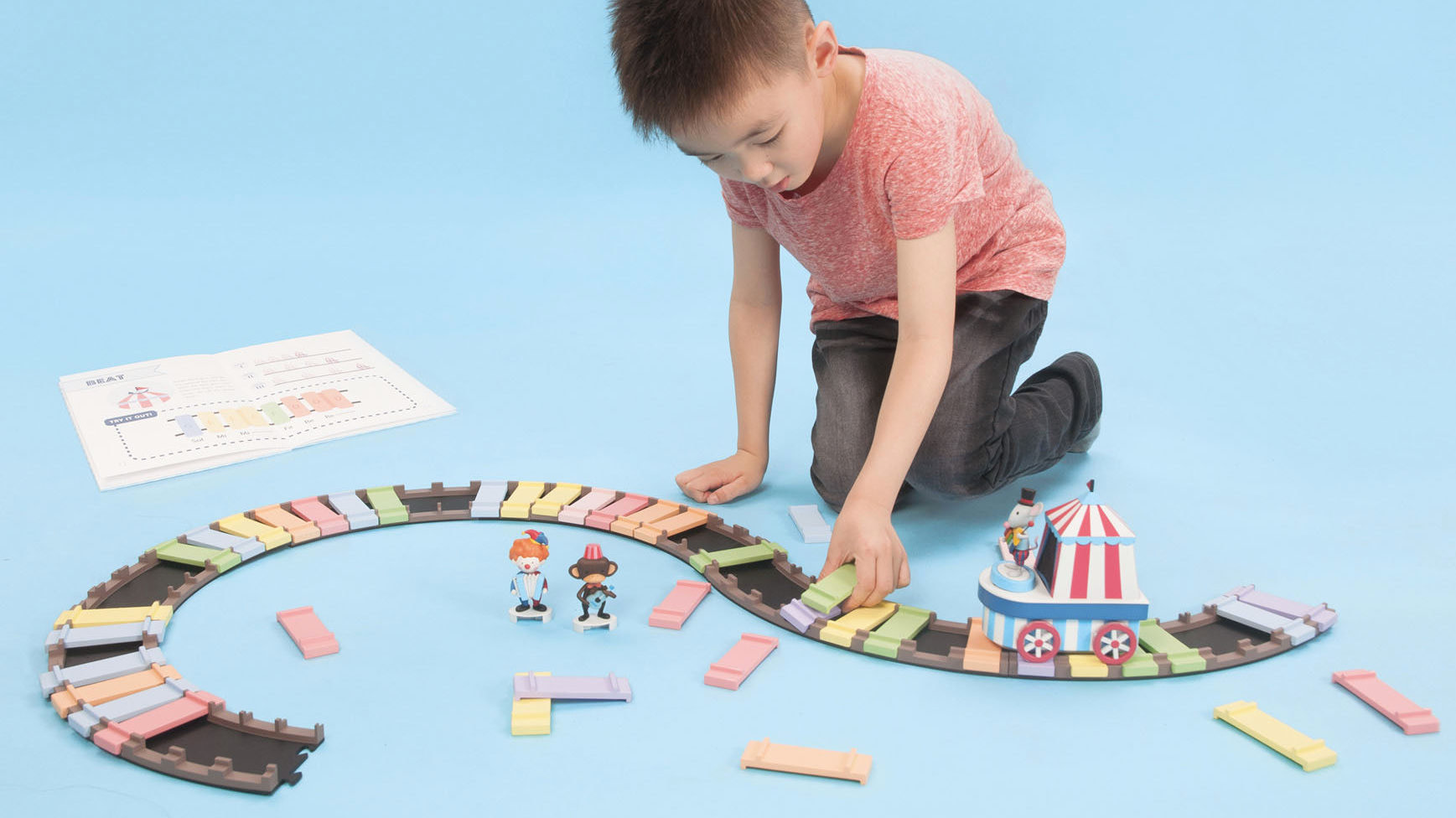 We visualized the basic music theory. Children can see, feel, and hear these abstract music concepts through playing with Melody Railroader.

Each color represents a note on the musical scale. As an ”achromatic color”, the black is considered as a rest in music.

The connecting-block is a tie combining two notes together. The longer a color continues, the longer the sound lasts.

Each rail section is like a measure of the same length. Several measures together can make a song. 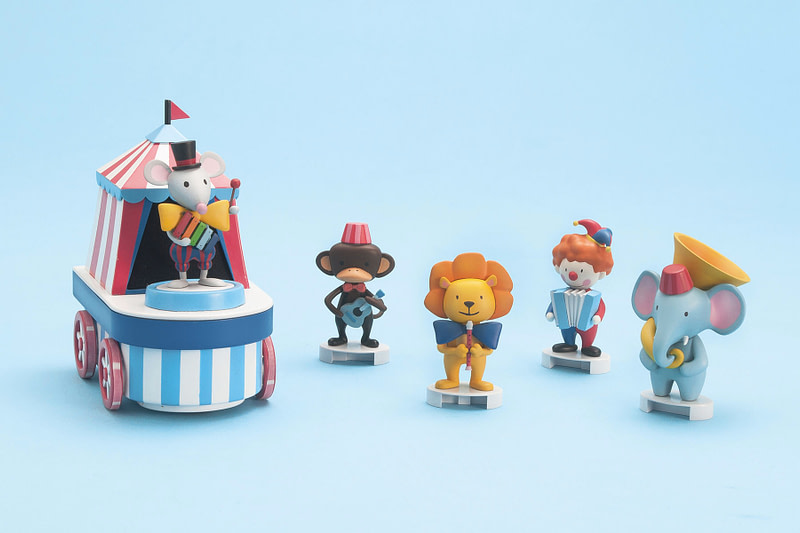 To make it more playful and attractive, we added a story of “a circus traveling around the world by train” to the toy. The train is designed as a circus tent, in front of which stands a circus animal with an instrument on its hand. Changing the animal would change the timbre played.

In addition, we designed 3 booklets as an aid for playing with the train toy. Each booklet has its own specific expertise.

The guideline helps children get started with Melody Railroader step by step. In this book, kids will learn the way of playing this toy as well as the music theory hidden in it. 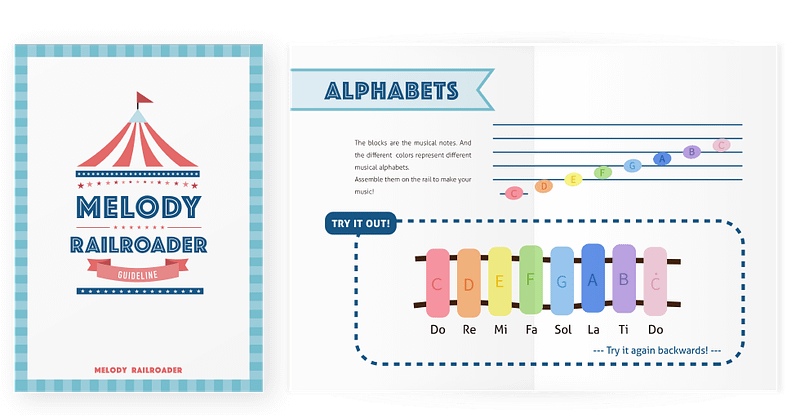 Melody Circus is going on a world tour! This book collects 12 ballads from different countries. Children can arrange the blocks by the score and travel around the world with the circus. 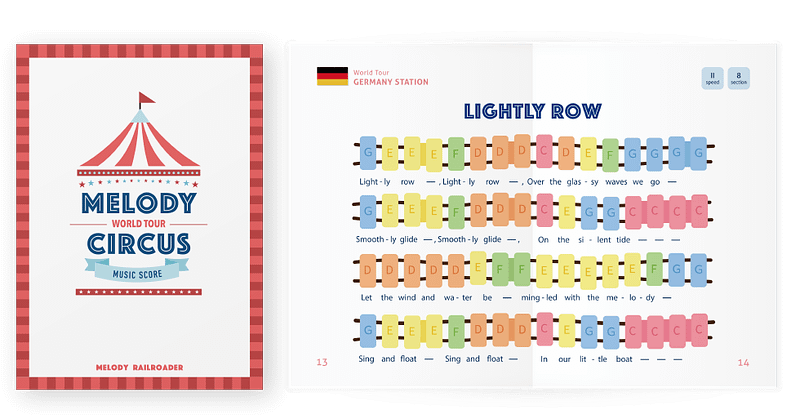 Besides making music by score, we also encourage children to create music freely. Kids can document their song on the blank score with the appended stickers. 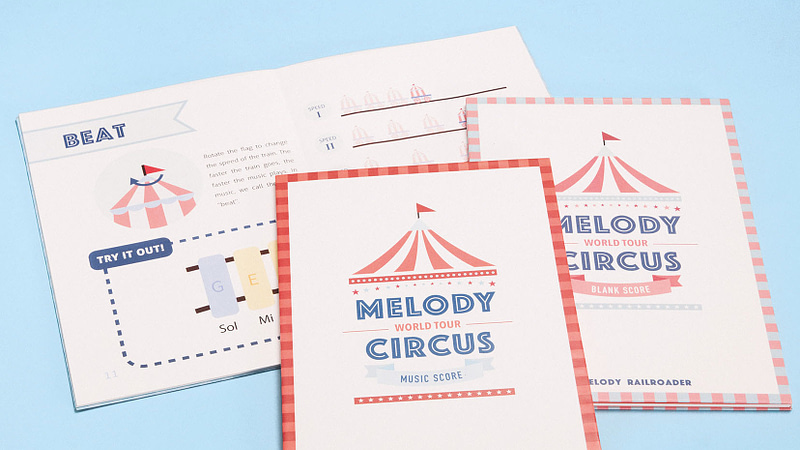 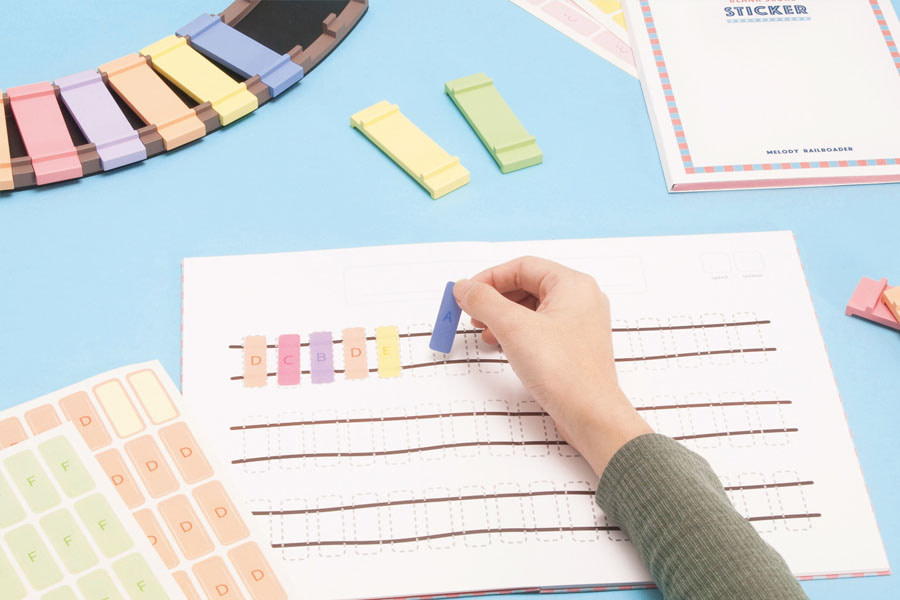 Melody Railroader is a fully-functional prototype made with Arduino. By virtue of that, we are able to run the user testing and examine our design by inviting children, teachers, and parents to play with Melody Railroader. The target users are children from 3-8 years old. Through our research, we found that children of different ages behaved differently when they play with it. 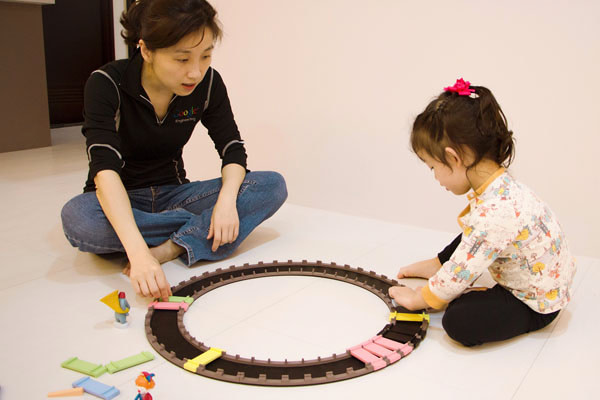 Little kids might not understand the message in this toy entirely. But they are able to play with this toy by following adults' guides such as "where is the pink?" or  "what is this instrument?"  One thing worth notice is that some accessories in this toy might be too small or too sharp for kids at this age. 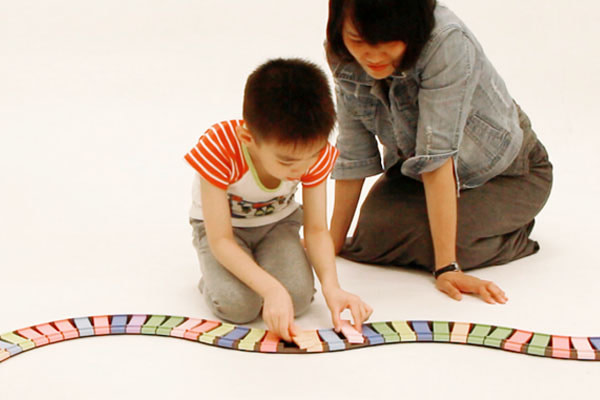 This age group can play and understand the toy well through the guide from adults, and are able to play independently after a few times of practice. Many of them showed great interest and excitement when seeing and hearing the feedback of the train drive through with music. 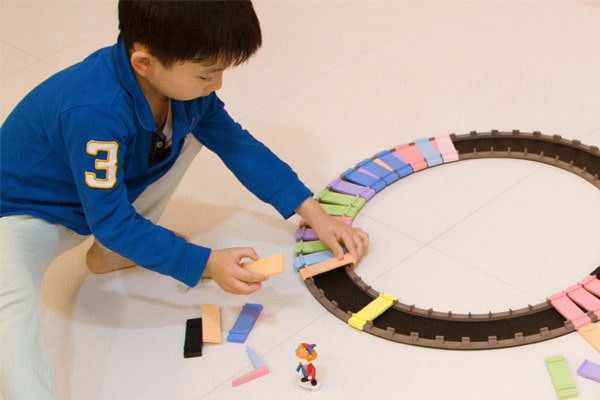 Among all ages, this age group can best immerse themselves in the playing context and comprehend the music theory with some explanation. Following the instruction from the booklets, they are able to arrange the blocks systematically and complete a song by the score. Also, they are able to create decent songs through trial-and-error. 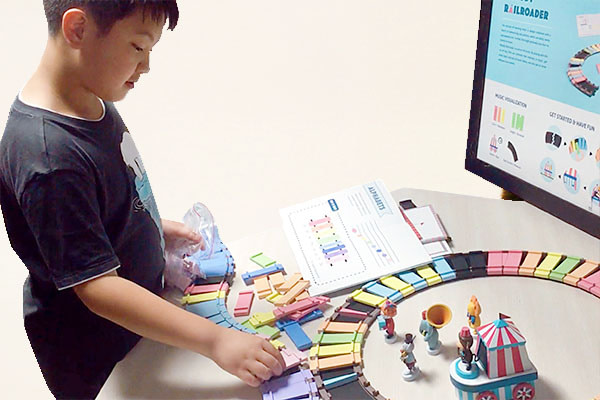 Older kids are able to understand how this toy works and master it in a relatively short time. Some kids can even apply the theory learned from music class to this toy, or vice versa. But this toy is limited to a certain scale, and cannot meet all the requests (eg. wider music scales or sharp/flat notes) that older kids asked for.

We got a lot of feedback and advice from the testers. Educational experts shared, “children are more willing to accept play as a teaching method and are receptive to participating.” Though there are still some details to refine, we believe Melody Railroader does have positive impacts on children. This can be evaluated by Dr. Howard Gardner’s theory of “multiple intelligences”: 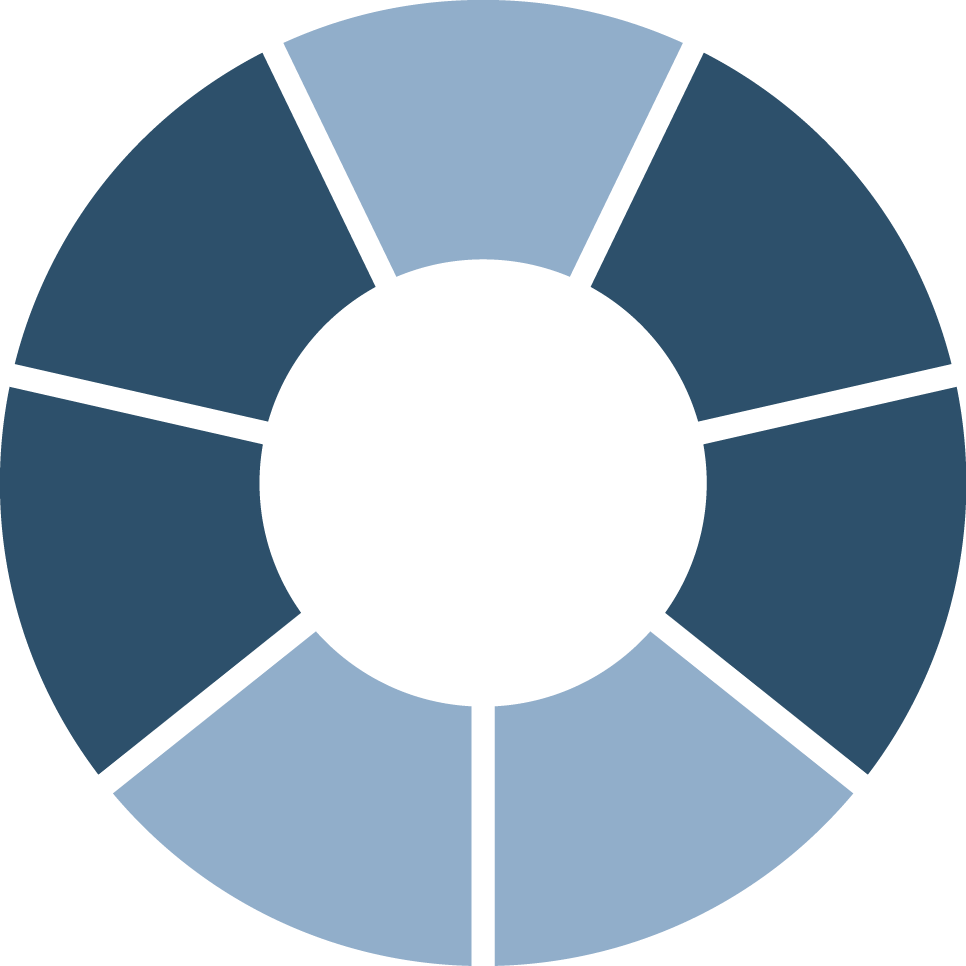 Training of planning and implementation.

Cognition of visual information, including color, shape, and space.

We visited the music class in kindergarten and talked to music educators. By watching, asking, and listening, we got a better understanding of the problem we were dealing with. By aids of the gained insights, we got the idea of using metaphor as a learning method.

To create a full-functional prototype, we worked with an IT engineer, who has been active throughout the process and provided meaningful insights from an engineering perspective. It was a precious experience to learn from, get inspired by one another.

This toy is composed of numerous parts and components: the blocks fitted to the track; the motor, gears, and wheels; and the electronic components inside the train. Through repeated prototyping and testing, we reached a satisfying result that everything works coordinately.

We are designing for children at the preoperational stage, whose cognitive skills are still developing. To help them successfully use the product, designs should display clear, specific instructions, leveraging kids’ mental models and prior knowledge.

We invited children, parents, and teachers to try our design. We observed and documented how the kids play with the toy, and interviewed the adults to know how they think. The feedbacks made us confident about our design result and get the findings for future improvement.